Herbert Garnham was born in Burston early in 1891, one of twelve children of Henry and Sarah Garnham.

There are a lot of gaps in Herbert’s story. With luck we’ll be able to fill some of them in in time.

The 1911 census found Herbert, then aged 20, living at home with his parents and working as a horseman on a farm. Also recorded in the 1911 census, living at School House in Burston, were the newly appointed teachers at the village school, Thomas George and Annie Katherine Higdon.

Three years later in 1914 local and international events made their presence felt in Burston.

In April 1914 the Burston School Strike started when the local children refused to attend the board school after their teachers Annie and Tom Higdon were sacked after a dispute with the local school managing body and its chairman, the recently appointed vicar Charles Tucker Eland. The children marched around the village with a banner reading “We want our teachers back”. The strike was to last for twenty five years. 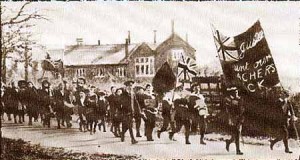 Some five months later, on August 4th, Great Britain declared war on Germany and the world would never be the same again. Thirty eight men from Burston served in the Great War between 1914 and 1918, among them Herbert and his older brother George. George returned from the war, Herbert didn’t.

The strike school meanwhile, attended by almost all the children in the village, carried on at first in a tent on the green and later as winter arrived in a carpenter’s workshop in the village. 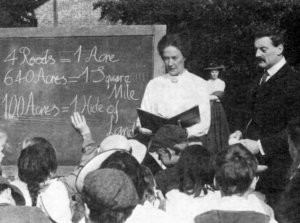 By this time the strike school had become a national and international cause celebre. In the spring of 1915 when the lease on the workshops ran out an appeal was launched to raise money to erect a permanent school building. Leo Tolstoy contributed to the fund, as did Herbert Garnham.

At about this time Herbert went to Norwich and enlisted in the Norfolk Regiment, joining the 9th Battalion. On August 30th 1915 his battalion landed in France.

Just over a year later during the latter stages of the battle of the Somme the 9th Norfolks were ordered to move into trenches south of Trones Wood near Guillemont. On 14th September they moved into front line trenches with orders to capture the Quadrilateral dugout east of Ginchy.

They attacked at 7.20am the next morning. The attack was unsuccessful and the Norfolks lost 18 officers and 431 other ranks killed, wounded, captured or missing. Herbert was one of those killed. He is remembered on the Thiepval Memorial. 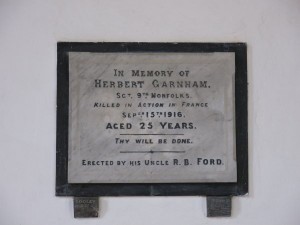 This so enraged Herbert’s father that he went to the the church with a hammer and attempted to smash the memorial. He was restrained before he could do too much damage, but to this day you can see the repairs to the crack across the face of the memorial 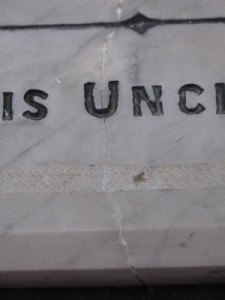 and the point where the hammer blow landed 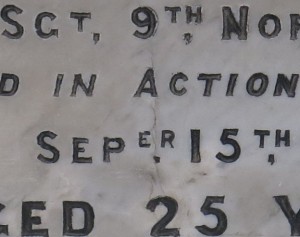 The new school, which Herbert’s donation helped to build, was opened on May 13th 1917 by Violet Potter who had led the original march by the pupils in April 1914.

Robert Ford’s daughter Sarah would have been thirteen in 1917. She would have attended the strike school, first on the village green and later in the carpenter’s shop before she and the rest of the pupils could move into the newly built school, funded in a small way by her cousin Herbert. 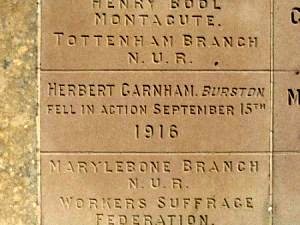 Thanks to Steve Smith and Tim Fox-Godden for help with the battle of Ginchy and the Norfolks’ attack on the Quadrilateral.