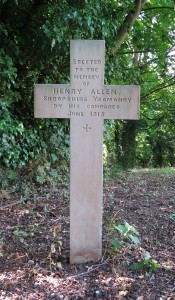 Henry Allen, born in Berkshire, served in the Shropshire Yeomanry, buried in a Commonwealth War Graves Commission grave in a rural Suffolk churchyard.

Henry or Harry Allen was a private in the Shropshire Yeomanry based in Flixton Park, one of many Territorial units stationed in this area throughout the Great War as a rapid reaction force in the event of German invasion.

Thanks to research by Steve Smith, author of “Norfolk, Remembering 1914-18”, who found his pension record we know now how Harry Allen died. He drowned.

The East Suffolk Gazette of 15th June 2015 contains a short report of an inquest held in Bungay. Entitled “Drowned in the Waveney”, it reports that Pte Allen had his tea just after 5.00 on June 7th and then went for a swim in the Waveney behind the Buck Inn with two friends Pte Campbell and Pte Steward at about 6.00.

At 6.30 he was seen to get into difficulties and despite Pte Campbell’s desperate efforts to get him on to the river bank he drowned. He was 25 years old. 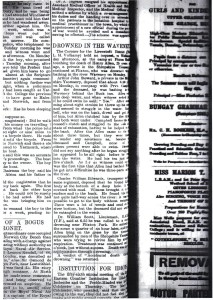