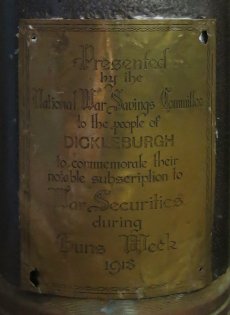 It is a bit battered and careworn is the Dickleburgh shell. And it’s not in Dickleburgh. It’s actually in the 100th Bomb Group Museum at Thorpe Abbotts, tucked away in a corner of the control tower.

You really should go and visit the museum if you haven’t already done so and when you do see if you can find the shell. It weighs about 290 lbs (or 130 kg for the young people) so it’s not giving too much away to say it’ll be on the ground floor.

It’s a 9.2″ howitzer shell, one of over three million made during the war. It’s known as a breech loading shell, which means that the whole thing came in two or three separate parts, the shell which we have here and one or two charges in canvas bags, so there was no huge brass cartridge case.

It was presented to the parish of Dickleburgh in 1918 in recognition of the village’s contribution to Guns Week. As far as we can tell, Guns Week in 1918 took place in early November, only a week before Armistice Day. 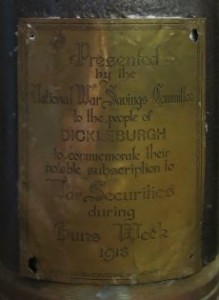 The inscription reads in full:

Throughout the Great War the Government used war bonds and war securities as a way of raising money to finance the war and raised billions of pound between 1914 and 1918. As the war went on captured German guns were toured around towns and cities to encourage people to buy war bonds and securities. In late 1917 Tank Weeks started, where British tanks would visit  towns and cities to encourage people to part with yet more money. Tank Week in Norwich alone in April 1918 raised over £1 million pounds. 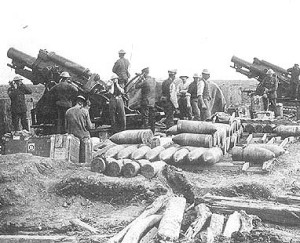 The Great War was the first artillery war. Artillery dominated the Western Front and was the single largest cause of military casualties during the war. This shell was one of the heaviest in everyday use by the British army. It was fired by the Ordnance BL 9.2″ howitzer, which could throw a high explosive round nearly eight miles. The gun was a massive thing in itself, weighing just under six tons. Each gun had a crew of twenty five men and could take two or three days just to set up before it could even start firing. Mobile they were not.

“We are the guns, and your masters! Saw ye our flashes?Heard ye the scream of our shells in the night, and the shuddering crashes?Saw ye our work by the roadside, the shrouded things lying,Moaning to God that He made them – the maimed and the dying?Husbands or sons,Fathers or lovers, we break them. We are the guns!”